A story about grout restoration experts, plumbing professionals, leak healing gurus and an assasination of a perfectly innocent shower cubicle.

Here is an example of a job that has zero commercial value to an honest restorer. The owner of the house discovered a slight movement of a tile in a shower base. There was also an accumulation of water under the tile. He called a plumber to check a leak. The Plumber blamed it on waterproofing (almost a custom). So, the troubled owner hired a tiler to fix the leak. 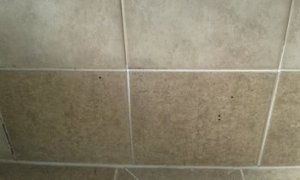 You can see this ‘fixing process’ recorded on the tiles in the form of disfigured silicone joints and a coat of something mysterious on top of grout lines (probably paper-thin layer of silicone). The leak actually stopped for a short while. Not after long the poor chap was on the phone again trying to find more skilled ‘professionals’.
And apparently he found one! A wise man came and banged out two and a half tiles from a shower base in search of a leak, I presume (LOL). 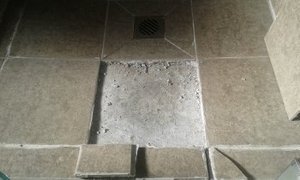 The illusive leak was not there. The owner finally found my website and called me.
After an examination I saw nothing that would indicate a leak anywhere! A leak can be clearly visible in form of water stains on a carpet, skirting boards and gib-board. I told the man a sad truth.

‘If you rang me at the very beginning, you would pay just under 400 and you would have this shower operational for the next 10 years. As of now, the only reasonable thing you can do is to rip it apart and install a plastic cubicle”

I did not contemplate for a minute a possibility of actually giving him a quote for some BS patch up. A plastic cubicle was the only reasonable solution taking into account that the rest of the bathroom was tiled. This job was good 12-15 years old. Meaning that getting a matching tile on the market was a pure sci-fi.

1/ A moving tile in a shower base is not unusual. Yes, it’s definitely not healthy and should never happened. However it is a call for an investigation not a demolition. Tiles on waterproofing membranes are very often installed using a rubberised adhesives. Those products actually contain small rubber particles and can be quite spongy. Building a shower base starts from installation of thick sand/cement screed with proper slopes towards the waste. If the formation of this screed was less than ideal, the slopes have to be corrected by packing up tiles with more adhesive. Of course that a tile sitting on 300 mm of rubber glue will bounce like a ping pong ball the moment anyone steps on it. Re-grouting the shower base with rigid epoxy grout might solve the problem (investigation necessary prior to doing a thing).

If a tile is moving because it does not stick properly, you one can hear a drummy noise after knocking on a tile. That’s a slightly worse scenario but might prove manageable. The tiles can be re-attached without uplifting via epoxy injection. It’s pretty difficult in constantly wet shower bases but definitely worth a try. You might be forced to stop using a shower for several weeks as water accumulated under the tiles has to dry out. Still, it’s worth the wait as you will be paying hundreds instead of thousands for a shower repair.

2/ Removal of a single tile from a shower area means the end of this shower. It doesn’t really matter if you can see the damage to waterproofing membrane caused by a tile removal. Once a tile has been removed a waterproofing membrane no longer can be trusted. No self-respecting tiler would give 5 minutes guarantee on waterproofing if he cannot replace the whole membrane (on walls and floor).

3/ There is ALWAYS water under tiles in shower area. Grout is no water barrier. It absolutely does not make any difference if your grout is in one piece or has holes like a Swiss cheese. Grout is a ‘sponge’ absorbing water.

4/ Let’s talk sponges. Just because your shower has glass walls it means nothing to the physical forces at play – capillary suction. Grout on one side of the glass wall is not an another country. It is the same continuous line of grout that extends into the shower area. If the grout inside the shower gets wet, the grout outside the shower can suck the water pass the ‘mighty glass barrier’. You do not notice that so much just because most of the water slides down not sideways thanks to gravitation. Water will always sink inside tiling adhesive and gib-board rather than slide on top of tiled wall.

5/ Which brings us towards another dangerous phenomenon – a building inspector trying to appear wise and important. Should you encounter one of those holding a moisture reader, show them the exit. I heard time and time again from my clients that they were forced to tear down showers and rebuild them just because the inspectors were not very happy about the numbers that their toys were showing them. Such a genius might cost you several thousands of dollars spend for no reason whatsoever. Moisture content does not indicate anything, water stains do. If there is no trace of a decent leak, there probably is no leak.

6/ Size DOES matter. If you see water stains on a ceiling under a shower area, that’s definitely a leak. If you see that a wall or carpet is wet in a neighbouring room/corridor, that’s a leak. If you see a small seepage of water on a floor beside shower cubicle, well… It might be classified as a leak, but a leak of this magnitude can be stopped within 2 hours without destroying a shower cubicle. All you need to do is to call ME. Again, for hearing loud and clear – ME. I will exorcise the demon before you know it and the dent on your bank account will be minimal. Even if your leak seems serious, I might be able to save you from a total financial Armageddon and two weeks of noise and dust. Just keep the gurus, specialists and experts in safe distance before I arrive.

7/ I almost forgot about my all time favourite – silicone on top of grout. Silicone is one of the best adhesives I know. In my bathroom I had a heavy mirror installed just on couple of blobs of silicone. Silicone will stick like hell to a NON POROUS surface (like glass or glazed tile). The same silicone is ABSOLUTELY USELESS if a surface is porous or (even matt finish paint). There is no way that a silicone can stick to unsealed stone, terracotta, unglazed edges of tiles and G R O U T. Remember the lesson about glass walls, water and grout lines? Only a complete Yeeehaaaaa-Cowboy can expect a coat of silicone bonding permanently with grout in a shower cubicle from all places!!!